Conservation leaders from across the country convened in Omaha, Nebraska for the 85th North American Wildlife and Natural Resources Conference hosted by the Wildlife Management Institute.  Safari Club International Foundation was a proud sponsor and a large team from SCI and SCIF was on hand to represent the organizations.

The annual Conference consists of numerous sessions, workshops, and more than 150 separate meetings and functions. Conference attendees include the administrators of federal, state and provincial wildlife agencies, academic programs, heads of private conservation organizations, and other managers, scientists, researchers, officials and students of natural resources. The conference is a regular gathering of professionals to learn and exchange ideas, through a formal program, related meetings and other scheduled business, social and educational events. 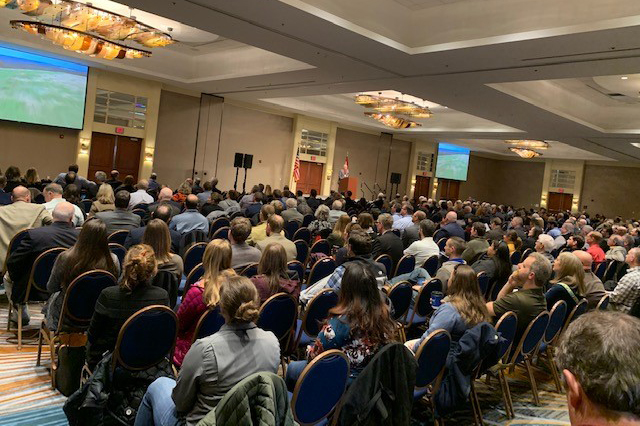 SCIF staff attended a variety of sessions focused on biological, human dimensions, and social science research related to wildlife conservation priorities across the continent and several researchers with projects funded by SCIF were in attendance to discuss their work. Chronic Wasting Disease was understandably a hot topic for discussion, and SCIF continued making strides to bolster the organization’s CWD public information campaign through involvement with the National Deer Alliance and the Chronic Wasting Disease Alliance.

The Association of Fish & Wildlife Agencies’ International Relations Committee also met informally and SCIF staff was on hand to discuss issues and priorities related to the international conventions on endangered species, migratory species, and sustainable use wildlife management. Discussions also focused on this year’s World Conservation Congress hosted by the International Union for the Conservation of Nature.

SCI’s Government Affairs team participated in a formal meeting of the American Wildlife Conservation Partners (AWCP),  a coalition of over 50 organizations linked together by their dedication to ensuring the vitality of our wildlife resources and providing for sustainable public use and enjoyment of those resources under the science-based management of the state and federal fish and wildlife agencies. SCI has been a member for nearly two decades.

The AWCP meeting included an address from Aurelia Skipwith, the Director of the United States Fish and Wildlife Service. Director Skipwith provided updates on a variety of agency priorities, including the potential delisting of wolves and grizzly bears and the legal challenges the USFWS faces with trying to move forward with the delisting process. She also provided updates on efforts to streamline the hunting rules and regulations at National Wildlife Refuges to align more closely with the rules and regulations of respective states.

The bulk of the AWCP meeting focused on updating “Wildlife for the 21st Century,” a document that outlines the collective legislative priorities and recommendations of AWCP member organizations. The latest edition will be the fifth version of the series. Previous volumes were provided to Presidents Bush, Obama, and Trump. The updated version will be distributed to the 2020 Republican and Democratic presidential nominees to help inform them of pressing issues related to wildlife conservation and our hunting heritage.

SCI staff also provided updates focused on issues surrounding the ongoing ballot initiative in Colorado related to wolves during the AWCP meeting. Additionally, SCI staff met with representatives from the Council to Advance Hunting and the Shooting sports to begin planning a presentation focused on legislative aspects of efforts to reduce barriers to hunting participation.

SCI’s legal team participated in the AFWA Legal Committee meeting. The meeting included presentations by attorneys from a number of state agencies on topics such as social media and anti-hunting sentiment, recovering civil damages for injuries to wildlife, and recent caselaw involving resident and non-resident hunting licensing. The legal team presented “Wildlife Law Jeopardy” to conclude the program. SCI’s staff also attended and participated in the International Relations Committee, Sustainable Use Committee, and Threatened and Endangered Species Policy Committee meetings.

SCIF is proud to have sponsored the conference, and both SCIF and SCI are grateful to have had a forum for productive discussions related to conserving wild places and wildlife things and protecting the freedom to hunt as a vital part of wildlife management in North America.