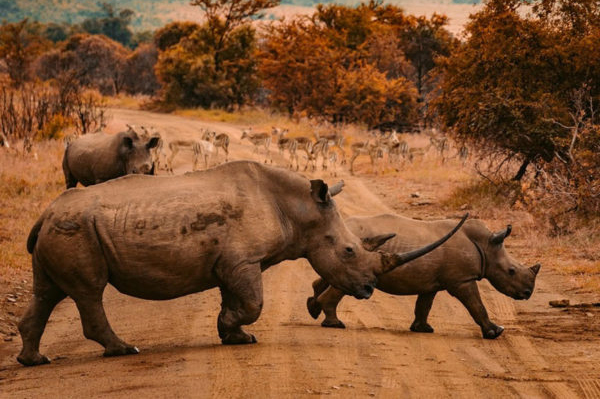 The South African Department of Environment, Forestry, and Fisheries recently reported that the number of rhinos lost to poachers declined for the fifth straight year. Poaching numbers in South Africa peaked in 2014 but have steadily and dramatically declined the last few years as the government has made an increased emphasis to crackdown on poachers.

594 rhinos were poached in South Africa in 2019, down from 769 in 2018 and reduced by over 50% from 1,215 in 2014. It appears that increased anti-poaching efforts are having a positive impact, as research has also shown that the number of poaching attempts on rhinos is on the decline. It is important to note, however, that there were more than 2,000 poaching attempts in Kruger National Park alone in 2019 so significant work remains to be done. 327 of the rhinos lost to poachers in 2019 were within Kruger’s boundaries.

“Because wildlife trafficking constitutes a highly sophisticated form of serious transnational organized crime that threatens national security, the aim is to establish an integrated strategic framework for an intelligence-led, well-resourced, multidisciplinary and consolidated law enforcement approach to focus and direct law enforcement’s ability supported by the whole of government and society,” South Africa’s Minister of Environment, Forestry and Fisheries, Barbara Creecy, said in a press release.

The decline in poaching is also chiefly attributable to the rangers who risk their lives to protect wildlife, a fact that Minister Creecy also acknowledged.  “A decline in poaching for five consecutive years is a reflection of the diligent work of the men and women who put their lives on the line daily to combat rhino poaching, often coming into direct contact with ruthless poachers.”

SCIF also supported the IUCN African Rhino Specialist Group’s annual meeting in February 2019 in Namibia. This meeting of the world’s experts in rhino management and conservation is key to coordination and capacity building across the African continent, integral to data collection and situation assessments that provide sound advice to counter threats to rhino populations.

Rangers of SVC’s Special Species Protection Unit in the bush

Thwarting poaching attempts is only one part of the equation for ensuring the long-term sustainability of rhino populations across Africa. Biological assessments and monitoring, habitat improvement, and range expansion are all critical aspects of rhino conservation that require community engagement and dedicated funding.

SCIF recently supported a status update of white rhino on private and communal land in South Africa through the SADC Rhino Management Group. South Africa is home to 90% of all Africa’s southern white rhinos, with most on private land.  Accurate population information is critical to ongoing management efforts. Although results are highly confidential due to the threat of poaching, the private sector continues to play a key role in rhino conservation while drought and poaching remain challenges in the Kruger ecosystem.

“The recovery of rhinoceros populations in southern Africa is a truly remarkable conservation success story, and one that has been driven primarily by hunters and private landowners in the region.  Reducing the serious impacts of rhino poaching has been a key component of that recovery and SCI Foundation and SCI members are proud to contribute to that success,” said Dr. Chris Comer, SCIF’s Director of Conservation.